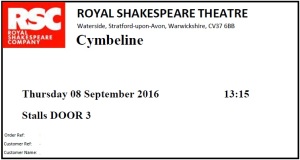 I couldn’t resist, even if I’ve still to plan everything else and I’m not even sure if I can make it!

But tickets are selling fast and I was afraid to miss the occasion to see two plays by William Shakespeare in his birthplace the year of the celebration of Shakespeare 400 (400 years since his death), or to find none or bad seats last minute! Those I’ve bought in stalls seem quite good.

And I’ve never seen Cymbeline, so it was worth to book for it and King Lear by the Royal Shakespeare Company, with very interesting cast performing in both the plays!

It will be also a good occasion to visit Stratford-Upon-Avon for the first time. It looks gorgeous from the pictures!