On Sunday 26 afternoon I was taking a look to my timeline on Twitter and I came across two tweets about a new musical and a new play dedicated to the writer J.R.R. Tolkien.

They told me they are completely unassociated, so it was a nice coincidence!

I loved reading The Hobbit and The Lord Of The Rings, he invented such a fascinating world with proper languages and writing, taking inspiration from real things, that’s maybe why his work is so appealing.

Not only Tolkien wrote some great books and inspired other artists, his whole life was an adventure! And tragic, too, starting from losing parents very soon and taking part to the WWI as a soldier.

These young talents are paying him what look like fantastic tributes! So they absolutely deserve a blog!

Both the productions talk about Tolkien’s friendship with C.S. Lewis, another writer who invented magic worlds and characters with his books. No surprises both are still sources of inspiration for many kind of artworks.

Let’s start from the first one I’ve found, the musical:

Tolkien – The Musical
Music and Lyrics written by Joseph Purdue

They are at showcase / development stage. Concert Trailer with musical clips are available on their YouTube channel.

“23-yead-old Joseph’s creation “Tolkien” explores the life of perhaps the 20th century’s most significant fantasy writer J.R.R. Tolkien – fabled auther of novels The Hobbit and the Lord of the Rings trilogy. … Throughout Joseph’s two hour musical, Tolkien’s maturity and traumas are shown: his upbringing with Father Francis, his involvement within the semi secret Tea Club and Barrowvian Society, the First World War, his friendship with fellow fantasy writer C.S. Lewis and finally the origins of the Lord of the Rings.”

And then the play: 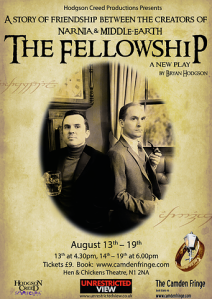 Synopsis: “In a dimly lit back room of Oxford’s Eagle and Child pub, two young Oxford graduates share stories of dragons, elves and Norse mythology amidst occasional beer-fuelled banter. C.S. Lewis, a fresh faced, impressionable yet imaginative young atheist, finds himself conversing with the energetic and highly opinionated new head of English, Professor Tolkien. Before the birth of their imaginative worlds, these two great minds developed a strong and inseparable friendship that was one of the founding and fuelling elements of the birth of Narnia and Middle-Earth. This UK premiere explores the very beginning of such an unlikely bond between a devout Catholic and an ardent non-believer, and their continued support and love of each other’s work.”

Bryan is currently playing Charlie Chaplin in a UK tour of “Chaplin: The Charlie Chaplin Story” and Anita has just finished filming a trailer for a feature film with Alan Ford (“Lock, Stock and Two Smoking Barrells”). She has also recently worked with Andrew Wright, double Olivier award nominee for choreography, and Amy Anzel who currently produced a national tour of “Happy Days” and is currently producing “Sideways” at the St. James theatre in the West End.

Here is a link to a review of the show where Bryan and Anita met: theargus.co.uk

I’m so curious on these two productions! If I was in London, I would certainly take a chance to see both the shows. Who knows if I’m able…? Never say never!

Looking forward to news from them!